Pino Daeni (1939 – 2010), born Giuseppe Dangelico, in Bari, Italy, 1939, grew up with the visual memories of the women in his family keeping the homefires burning during the uncertain times preceding World War II. These beautiful Italian women maintaining domestic tranquillity would later infuse the soft romantic canvases of Pino with warmth, nostalgia, love, and family.

Pino’s artistic journey began in grade school when his first grade teacher recognized the boy’s talents. His father couldn’t encourage his gifted son because he didn’t believe he could make a serious career as an artist. Pino’s unfaltering desire and determination persevered, and he left Bari to pursue his artistic spirit in Milan in 1960. He attended classes at the Academy of Brera where he perfected his skill and talent for painting nudes in the classical tradition or Sorolla, Boldini, and Braque. Determined to gain recognition, Pino began doing illustrations for a textbook publisher. Despite becoming one of the leading illustrators in Europe by 1979, Pino wanted to be closer to the dynamic center of the art world, New York. By 1989, his oeuvre was marked by hundreds of book covers painted for writers such as Danielle Steele, Sylvie Summerfield, and Amanda Ashley.

Eager to leave the restrictions of illustration and to explore abstract expressionism, Pino began showing his brilliant canvases to galleries in 1994. The success was immediate among collectors and Pino began to distill over forty years of training and experience into each new painting. Pino’s technique, his warm and exciting colors and the subtle, yet simple approach to his subject, show a maturity of style, both distinctively and deeply rooted in art history.

Pino’s paintings are often set on vibrantly sunny beaches, typically in the Mediterranean where he grew up. His alter ego, a young boy surrounded by beautiful women, are found in various states of emotion ranging from adoration to isolation. Many of Pino’s characters are also found frequently inhabiting sensuous boudoirs or dressing rooms in anticipation of their husband or lover. Feminine, ephemeral forms of flesh whose light and shadow suggest depth and mystery are contrasted with explosive passages of rich textured color in compositions that are as much about how the artist feels as what he sees. It is the subjective illusion of space juxtaposed with an abstract acceptance of the painting’s flat surface that sets Pino’s work apart from other artists. Studying the images carefully, they often only reveal themselves completely, like fine wine, with quiet contemplation. 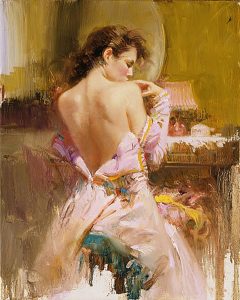 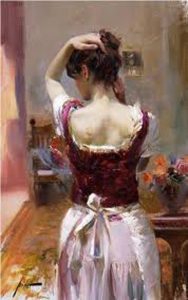 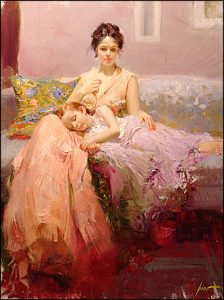 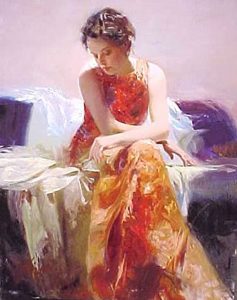