Liu-Miao Chan was born in 1946 to a poor farming family on the island of Taiwan. He grew up working the land beside his father and grandfather, from whom he learned the Confucian virtues as well as the discipline of hard work. An artist from the first, Chan lacked even pencils and paper, so drew endlessly in the dirt with a stick. He was able to get an education through a government Teacher Training Program, and was ultimately accepted at the National Art College, where he became a gifted woodcarver, sculptor and painter.

Chan then became intrigued with the ancient – and long-lost – art of leather sculpture. It took him five years of research and experimentation to master the traditional processes of antiquity and perfect his craft. In 1986 he was declared a “Living Treasure” by the government of Taiwan, which sponsored a tour of his work to Seoul, New York, San Francisco, Los Angles and Paris. His works are in the collections of the Heads of State of Hungary, Belgium, France, Japan, Argentina, Poland, and South Africa to name a few.

Chan’s sculptures convey a sense of living intimacy that seems to pulse with warmth and breath. The secret is his unique talent of working with leather. Chan first carefully selects the finest cowhides, rejecting those with any flaws. Due to its fine texture and pliability, this leather is used for the facial features, limbs, musculature and the trailing sleeves of gowns. Thicker leather is used for the more abstract elements such as tables, chairs and other decorative accessories to suggest their more coarse texture. The preparation process is kept secret, but involves many steps to prepare the leather and increase its durability while maintaining its flexibility. Each piece is coated with a special formula to allow the sculpture to retain its sculptured shape.

The sculpture’s facial expression, which is the heart and soul of the entire sculpted figure, is the most difficult and challenging. So, beginning with the head, Chan works the leather by pulling, twisting, pressing, pinching, hammering, squeezing, shaving and piercing it in order to create the face, then every part of the body. After the shaping is completed, Chan paints the leather with acid-based or oil-based dyes. Once they are completely dry, he sprays each work of art with transparent lacquer as a preservative. The entire process of producing one of Chan’s pieces takes approximately 6 months. 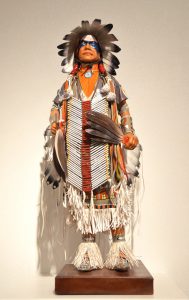 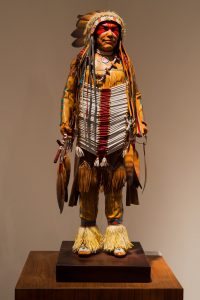