Kevin Red Star (born 1943) is a Native American artist. Kevin Red Star was born on the Crow Indian Reservation in Lodge Grass, Montana. He was raised in a family that values art and culture, where he developed an early love of drawing and music. This exposure and encouragement sustained him during his years in grade school during the time when Crow students were denied association with their language and cultural heritage.

Later, when he was one of 150 students chosen to attend the newly established Institute of American Indian Arts in Santa Fe, New Mexico, he was encouraged to explore his history and culture through modern art techniques.

Upon graduation, Red Star and several other Native students received scholarships to the San Francisco Art Institute. Here he was exposed to the avant garde and political and social concerns of post-modern art.

Since embarking on his professional artistic journey, the acknowledged master artist is considered a visual historian and ambassador for his Native Crow culture. In 1997, Kevin Red Star received an Honorary Doctorate Degree in Fine Art from the Rocky Mountain College in Billings, Montana.

Kevin Red Star has been accepted into the Russell Skull Society for the Charlie Russell Auction March 2014, an exhibition and sale to benefit the C.M. Russell Museum. 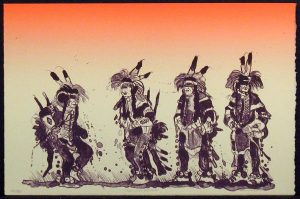 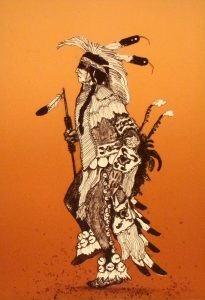