Jurgen Gorg was born in Dermbach, West Germany in 1951, Gorg’s formative years were spent in Koblenz before moving to Mainz to study at the Johannes – Guttenberg University for four years. He has happy memories of his student days and in particular, of his teacher Saalfield, who motivated him to draw with academic precision, a skill which contributes to the quality of his work today.

Gorg began his professional career in 1977 as a painter and printmaker. In 1980, he was awarded a special prize by the district of Rheinland – Pfalz. His first sculpture was completed in 1990.

Jurgen’s artistic universe consists of lovers, dancers, musicians and masked personages. Tender, lithe, slim and young, these idealized, loosely rendered figures suggest the timeless and eternal. An elusive quality is cultivated by Gorg who feels that “something should always be left open.”

With his paintings, Jurgen often uses a monochromatic palate. soft colour is applied with graphite in combination with translucent layers of oil paint. Shading is subtle, white highlights focus attention as does the sparing use of bright colour.

Jurgen Gorg’s impact on the European art scene has been little short of sensational. Still only in his early 50’s, he has emerged as a true and original talent utilizing both traditional methods of printmaking, as well as painting, drawing and sculpture. His work is now much sought after. His technical accomplishment and his ability to reproduce the moving figure so sensitively makes his work irresistible to many collectors throughout the world. 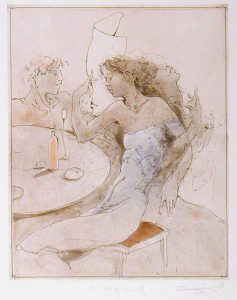 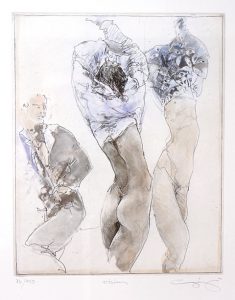