John Nieto is one of America’s most dynamic contemporary artists, concentrating on themes that transcend mere representation. He utilizes intense primary colors, applied in bold strokes to give dimension and character to the canvas. In his etchings and drawings, Nieto employs classic linear techniques to create images of great detail and depth. In all of Nieto’s art, sensitivity and respect for his subject are projected. He concentrates on capturing in his work his unique vision of the subjects he paints on canvases of vibrant, electric hues. The bold imagery of Nieto’s dynamic style is the essence of his art through which he seeks to evoke a reaction or response from the viewer. His art is a synthesis of his philosophy and his technical versatility, a powerful expression of pride and vitality. Nieto is unique among contemporary American artists. His personal philosophies are a vital element of his consummate style. Nieto states, “I employ a subject matter that is familiar and express it the way I see it”.

This is accomplished via his use of vibrant color and strong assertive line. The combination of his sensitivity with his technical versatility becomes the vehicle that allows him to transcend the ordinary. After participating in an exhibit at the John F. Kennedy Center for the Performing Arts in Washington, D.C. John met with President Reagan in the Oval Office of the White House and presented him with the painting “Delegate to the White House”. The painting hung in Washington for the duration of the President’s term in office and now has been included in the presidential library.

Nieto’s distinctive style, combination of subject matter, bold comparisons and searing color, is instantly recognizable and collectors throughout the United States and abroad prize his work. He has produced bronze sculptures, etchings, lithographs and silk- screen prints, in addition to drawings in pastel crayons and charcoal. The past several years, however, have been devoted almost exclusively to painting. In 1981 John participated by invitation in the “Salon d’Autumn” at the Grand Palais, Paris, France. In 1989 he mounted a one-man show at the Axis Gallery in Tokyo, Japan. Each summer he has an annual exhibition in Santa Fe, NM at Ventana Fine Art and Altamira Fine Art in Jackson Hole, WY.

John Nieto’s family roots run deep in New Mexico, as it has been his ancestral birthplace for more than 300 years. John and his family have lived in various northern New Mexico towns and now reside in Texas. 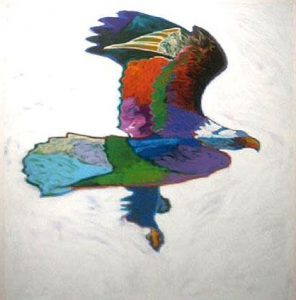