Ira Reines was born in New York, New York on December 3, 1957 and by the age of five his sculptural talents began to emerge. At nineteen, one of Reines’ sculptures caught the eye of the director of the Medallic Art Company of Danbury, Connecticut who offered him employment sculpting medallions. He gratefully took advantage of this opportunity to learn advanced plaster-working techniques and to hone his sculpting skills.

The worlds of fantasy and mythology and the works of Michelangelo, Rodin, and Bernini fueled the imagination of Reines and encouraged him to create elaborate bronzes and to begin to accept private and commercial commissions.

In 1980, Ira Reines’ career got a tremendous boost when he was hired to work with Art Deco Master Erte, considered by many as the father of Art Deco. Ira worked closely with Erte, translating the master’s two-dimensional designs into seventy bronze sculptures that were sold world-wide. This symbiotic association with Erte lasted eleven years, up until Erte’s death in 1991. During this period, Reines’ skills and personal style in fine art sculpting began to evolve, undergoing a metamorphosis from classical mythological themes to more contemporary ones.

While some of his earlier works, such as “Leda and the Swan”, had a decided Art Deco feel, his “Neptune”, on permanent display in the Philip Hulitar Sculpture Garden of The Society of the Four Arts in West Palm Beach, Florida, depicts the god of the sea from Roman mythology.

The sculptures of Ira Raines have now progressed to the point of being referred to as “Sculptural Etherealism”, delicate and intricately formed figures of near-perfect beauty, often in poses of extreme balance, sometimes emerging as-if in the process of creation, and replete with beauty and spirituality. Beauty born of chaos, form created from formlessness, for Reines feels that “Beauty is a perfect reflection of divinity.”

Reines studied the works of Michelangelo, Bernini, and Rodin most passionately and even had the good fortune to experience their masterpieces first-hand in Rome and Florence when he was twenty, a very inspiring experience. As he grew older, he also came to admire the work of twentieth-century master sculptor Frederick Hart, but admits that “My work is more emotional… That’s where I feel my work greatly differs, because my figures are awakening joyously.” 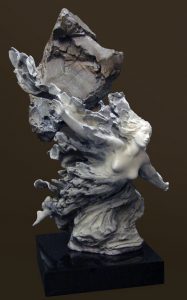 Mountains of the Sun