Gib Singleton was the foremost Western and Biblical bronze sculptor in the late 20th and early 21st century in America – and, many critics and collectors argue, the world. His work has been shown in major museums from the Museum of Modern Art in New York to Yad Vashem in Israel and the Vatican Museum in Rome, as well as in the homes and offices of luminaries from actors to politicians to spiritual leaders. ‘Gib was a giant,’ said Paul Zueger, Gib’s long-time friend and exclusive representative. ‘You can’t say enough about his vision and his talent. I think 500 years from now, art historians will talk about Gib like they talk today about Rembrandt or Van Gogh or Michelangelo.’

Gib knew from his earliest days that he would be an artist, even though no one believed a sharecropper kid from the ‘bootheel’ of Missouri could achieve such a dream. With no money for supplies or lessons, Gib traced designs in the dirt with sticks, made sculptures out of mud and straw, and drew Christ figures in pencil on paper sacks. His family began to believe in his talent when he won a blue ribbon in art at the Springfield State Fair at age nine. And while they couldn’t help him financially, they at least encouraged Gib to follow his dreams. His first attempt at sculpting was transforming a granite tombstone ‘recycled’ from an old cemetery. When he became fascinated with bronze, especially the works of Donatello that he saw in a book, Gib built his own foundry. He used salvaged materials, including a cut down 55 gallon steel drum for the furnace and an abandoned Electrolux vacuum cleaner for a blower. He figured the process out by trial and error, learning to determine the temperature of the molten metal by its color. He was 16 at the time.

Gib’s trademark cowboy look emerged in early watercolors and acrylic paintings while he was still in high school, as did the first drawings of what would become his world renowned Biblical style. After high school Gib served a hitch in the US Army, put himself through college, taught high school art, then won a Fulbright Fellowship to restore Renaissance art in Europe. He studied at the Accademia di Belle Arti in Florence, and was later recruited by the Vatican Workshop.  Gib was driven to perfect his own art, and willing to pay the price of his quest. When he returned from Europe, he sold his work on the streets of New York City, slept on beaches in Connecticut, and was often hungry.

As his unique style of sculpture developed, Gib coined a new term to describe it — ‘Emotional Realism’. ‘I got the idea of Emotional Realism when I was visiting a museum,’ Gib said. ‘I saw art that touched me deeply, and I realized that the emotions I felt were just as real as that piece I saw hanging on the wall. I think the ability to connect with the viewer on that emotional level determines the success of art, or music or literature.’

While living in the Northeast, Gib visited the Frederic Remington Art Museum and was struck by the power of the artist’s work and of the landscapes they represented. ‘I knew right then I had to go out West,’ he said. ‘I decided to move the Santa Fe and do Western art.’ While his fascination with the West led to the creation of such well known pieces as ‘Texas Ranger’, ‘Black Jack Ketchum’ and ‘Santa Fe Trail’, Gib never lost his love of Biblical and devotional art. In fact, he contended there’s really no difference between the two. ‘Any time your subject is a human being,’ he said, ‘it’s a spiritual work. You come into this world by yourself, and you go out by yourself, and nobody knows why that is. We all have those questions, regardless of how we label ourselves or what kind of outfit we’re wearing. I try to answer some of those questions in my work.’

Although confined to a wheelchair and tethered to an oxygen machine during the final decade of his life due to Chronic Obstructive Pulmonary Disease, Gib still worked on his art nearly every day. And while his overall output diminished, many of his most powerful works emerged from his tiny garage studio during that time. ‘After the death of my daughter, and then being told in hospice I had six days to live, something shifted,’ Gib said. ‘I was able to understand so much more of life and death and redemption and resurrection that I finally felt able to render it in my work.’ It was during the final years of his life that Gib produced the Four Horsemen of the Apocalypse, the Stations of the Cross, The Death of Christ, Requiem, Redemption and the Wrath of God / Last Judgment, Aces and 8’s and Lincoln, along with many others.

Asked why he shifted more toward devotional work in his final years, Gib said it seemed appropriate for our troubled times. ‘People need security in the metaphysical world even more than in the physical world,’ he said. ‘There are a lot of things that make no ‘objective’ sense if we try to analyze them. Yet they do make sense – a great deal of sense – if we approach them with our hearts instead of our heads. That’s how I try to work.

‘The thing I really love about my work,’ Gib said, ‘is that I get to say, “I love you, man. It’s going to be OK.” And the payment for my work is when someone comes up and says, “Thank you for making something beautiful in the world.”’ 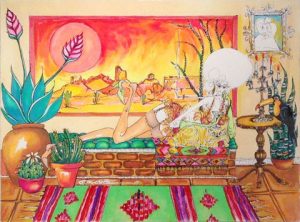 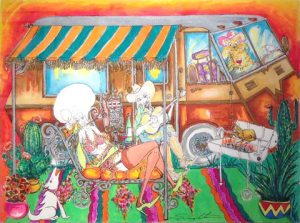