Bruce King has utilized all things given to him in life through improvisation in his creations. King’s love for screen writing quenches his thirst to tell a riveting story. Similarly, acting and theatre are coupled into an outwardly presentation of that story. And in a different voice, Bruce King’s professional fine art career has pushed the realms of storytelling into a reality that can only be expressed with freedom. It’s this freedom that reminds King that creating is what he does and most certainly not who he is.

Bruce King has had his artworks collected by the Institute of American Indian Arts, the North American Congress on Latin America and the Six Nations Mohawk Museum. He collected invitations to the Southwestern Association for Indian Arts’ national Indian Market. Numerous fine art galleries across the world accelerated King’s integrity as a serious artist. Currently, Bruce King and his wife live in Santa Fe, New Mexico where he continues his artistic expression by playing blues guitar, writing articles for the Smithsonian and screenplays for actors such as Wes Studi and preparing for solo fine art shows across the country. King is most certainly giving respect to all gifts given to him in life and is happy to continue doing what he does. 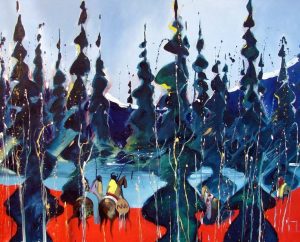 A Glance at Spirit Lake