Bruce Carlton (B.C.) Nowlin was born in 1949 in Alameda, New Mexico. He spent his childhood on the edge of the Sandia Pueblo Reservation. His teenage mother spent her early years in the Laguna Pueblo earning her the Indian name “Little Bird”. His father, Duke, worked in Albuquerque at a highly classified government job. B.C.’s Native-American friends gave him the symbol; the bird-and-moon, a calligraphic logo he signs to every piece of artwork.

His southwestern roots and his intimate relationship with Native American history and culture have a strong influence on his work. His paintings are vibrant and intense. His use of color and imagination is exceptional. Each piece is filled with emotion and illustrates a journey, both for him and his paintings. His work often portrays universal places filled with mystery and spirituality and tribes of every nation moving towards brighter destinations.

B. C.’s work has grown with the times. His work is exhibited in collections from Hewlett-Packard and the Discovery Channel to the Palace collection of Costa Rica. He has produced several unique, once-only showings of theme-works, such as the “Women in the West”, a masked ‘desert’ event in Contemporary Southwest Gallery in Santa Fe in 1996, and “Vessels”, part of a series of the two-man shows, in which Nowlin is billed as two different artists exhibiting distinctly different sets of images. His works have gained the attention of celebrity collectors such as Tanya Tucker, Robert Plant and Sophia Loren. B. C.’s artworks have been featured in Jay Leno monologues and are familiar worldwide as album covers and Hollywood set-pieces. Nowlin is also gaining attention as a writer. His twenty-year project, “The Fifth Gospel” is about to be released.

His inspiration and passion often comes from his motorcycle. A daily ride to the nearby Murphy’s Mule Barn Café for conversation, newspapers and coffee start his day of artistic endeavors. He lives in a 110-year old adobe house with his wife and children. 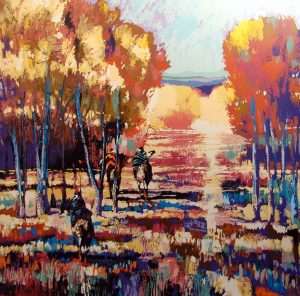 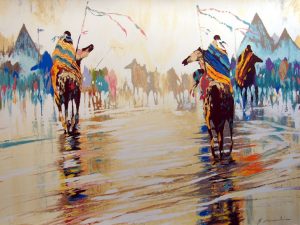 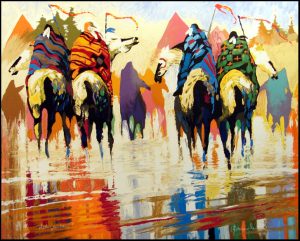 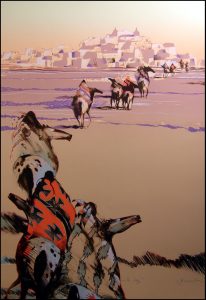